As you can see from the date of our last blog, we have not been regular enough in keeping our supporters and prayer partners abreast of what’s been going on here at Kingdom Driven Ministries. Facebook friends of Marc Carrier or Isaiah Carrier or Glenn Roseberry  get regular updates that way, but unfortunately the blog has not been kept up very well. Perhaps we ought to make a resolution for 2018 but then, we’d have to let our yes be yes (Matthew 5:37), and it’s probably not wise to make that commitment.

Silence on the blog is not because there isn’t much going on; in fact, we’ve been so busy doing the work that we have little time to write about it. 2017 has been an amazing year and God has done great things! We recently looked at our 2017 financials in preparation for doing year-end accounting, which seemed a good way to present our year in review and let you see just a bit of what’s been going on here in East Africa. The financials do not represent any of the work done by Glenn Roseberry (primarily in Tanzania and Nairobi), as this is independently managed and accounted for. Glenn provides regular updates via Facebook, so that is a good place to catch up. The work reported here focuses on Kitale-area fellowships and evangelism, and various programs in the Carriers’ village community and the surrounding area. Below you can see the breakdown of funds by percentage and category. 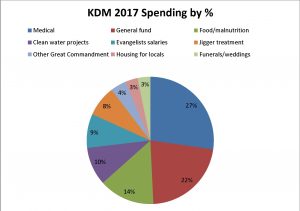 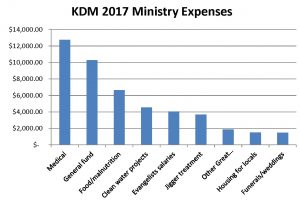 In summary, we spent approximately $47,000 in Kenya. 27% went to medical treatment; 14% went to feeding the hungry; 10% was invested in clean water projects; 8% went to jigger treatment; and 10% went to other Great Commandment work (includes funerals, housing, weddings, and other services for the poor and needy). Therefore, 69% of KDM’s Kenya budget went directly to support the various needs of the poor in our area. The remaining funds supported our team of evangelists and “overhead,” or General Fund expenses.

General Fund expenses do not include support of any American missionaries; this type of personal donation can be made through KDM but must be earmarked as such. Instead, our General Fund (GF) provides a salary to a number of indigenous brethren who provide valuable services in evangelism, discipleship, and program management. To help you see how these GF funds are allotted, let’s look at November 2017 as a representative month (although every month is different). 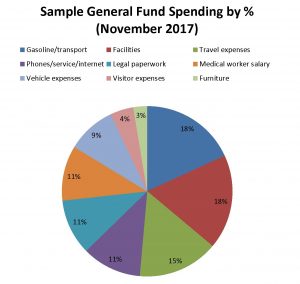 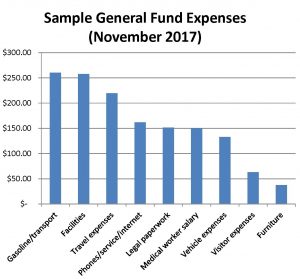 To do both Great Commission work (kingdom expansion) and Great Commandment work (assisting the poor and needy), we need to have legal authorization, be able to communicate, have a place to work, and a way to get from place to place. That makes up our “overhead,” which is taken from the General Fund. Gasoline and public transportation used up 18% of our General fund spending in November. That was higher than normal because of hosting an American visitor (we used the car rather than motorcycle several days per week which consumes much more fuel). Legal paperwork consists of keeping passports and work permits current, and going to Nairobi necessitates overnights and meals. There were two such trips during November, though this is a bit atypical.

Our facilities are paid for, but during November we upgraded our solar to accommodate two additional families (KDM workers and brethren) in our compound. We also upgraded two phones for field workers.

With that said, this is a brief summary of spending, not results. Let’s put a face on just a few of this year’s numbers.

As you can see from the graphs, the lion’s share of funding goes to our medical program, which we allocate as “regular medical” and “special medical.” We spend approximately $300-$400 per month on acute medical needs among the impoverished in our village: treating malaria and typhoid, broken limbs, various infections, and so on. We send an average of 15 such patients per month for  treatments at our local clinic or hospitals. Larger medical needs are solicited on a case-by-case basis.

One of the most expensive cases we took on this year was that of Mary Nelima, a 42 year-old mother of three who was the victim of a motorbike accident in 2012. Her medical care for a shattered femur was minimal because funding was simply not available. Once she was left disabled, her husband abandoned her and she was forced to return to her parents’ home along with her three children. Unable to work, you can imagine the life that she and her children have lived for the last five years. When she developed signs of infection in her leg (pain, pus discharge, and even splinters of bone coming out of a now-festering wound), she came to us for assistance. We took her to a private, orthopedic hospital and were given an estimate of $3,000, which we assumed would take care of existing infection and address a long-term solution for her leg. Instead, she was immediately admitted and treated for chronic osteomyletis (bone infection), which had progressed for so long that it was very hard to treat. And because it will likely return, no further work was recommended by the surgeon.

Mary spent three weeks in the hospital, where her bone was scraped repeatedly and she was given strong antibiotics by IV. Eventually, the infection was brought under control and she has been discharged, though she continues to take oral antibiotics at a cost of approximately $100 per month. The outcome was not what we had hoped for (in terms of allowing her full use of her leg), yet she praises God for healing the infection and all of its effects. Please pray with us that though diagnosed as “chronic,” the infection would not return. 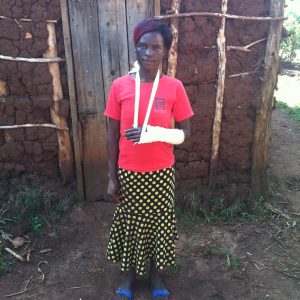 Violet Osia was just one patient who came through our regular medical program during the month of October. She is a widow and mother of two who lives in our village. Her husband passed away two years ago after being poisoned by “friends” while drinking alcohol, thus leaving the responsibility of raising their two daughters with Violet. Just a few weeks ago, Violet’s neighbor broke into her single-room house and stole several bags of dry maize which Violet had stored for her children as food during the hunger period. When Violet confronted the neighbor and demanded that he return her property, the man got extremely angry at her, finally chopping at her hand with his machete. Violet’s two small children watched in horror, unable to help their mother, as the neighbor ran away. Thankfully, some good Samaritans rushed her to us so that she could receive the necessary first aid.

Our food program is designed to provide a small but consistent amount of dry maize (a staple here) for those with food needs, especially widows, the elderly , and the disabled. At present, approximately 80 people per week receive food assistance! Here are some of their faces, from one of our weekly distribution days during the month of September: 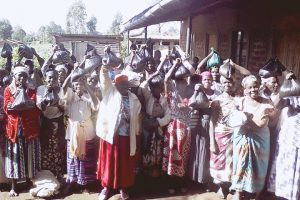 During 2017, we also regularly served plus-or-minus 7 malnourished children, providing them with protein-rich foods, porridge, milk, oil, and sugar, to supplement their regular diet. In one particularly sad case, a child died even though every effort was made to rehabilitate him after his circumstances were discovered. However, others have formally “exited” the program after making great gains and being given a seal of approval by our local nutritionist.  This three year-old, a particularly pressing case we took on this year, is making great gains. He added about 2 kg of weight in just months, but he is still receiving assistance: 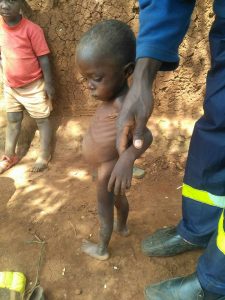 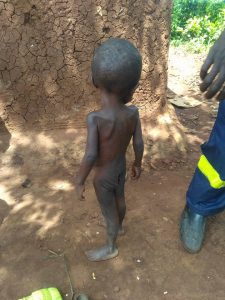 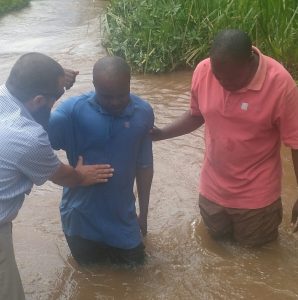 Our evangelistic efforts have resulted in large numbers of baptisms and our evangelists and teachers are also devoted to ongoing discipleship. One of our evangelists, a former Imam, has slowly but surely been exposing his multi-generational Muslim family to the gospel of the kingdom, and we rejoiced when his younger brother renounced Islam, repented of his sins, and was baptized just months ago!

One of the highlights of our year has been instituting weekly kesha (the Swahili word for “watch,” which also refers to the practice of an all-night prayer meeting) and monthly multi-day, corporate fasting meetings. This has been great for discipleship, as we spend some time teaching, but it has also fostered an incredible unity among the brethren and we have really seen an operation of the gifts of the Spirit as we gather together regularly. Attendance remains high and we rejoice to see how God has so faithfully answered our prayers: guiding the mission here, strengthening the brethren, growing our fellowships, and bringing healing and deliverance. We praise God for all He has done this year, and hope that this little glimpse will show you how many lives have been impacted for the kingdom of God because of you, our faithful supporters. Please continue to keep us in prayer during the coming year.