Bidii is a Swahili name that means effort. It’s a good name for the fellowship in Bidii, since it is a small community of believers that has been bonded together through great effort by our brother, Lazarus Lordia. As they live and work together, it is also with great effort that they are seeking to live out the teachings of Jesus and be a supportive community of brothers, each helping the other to succeed and to earn their “daily bread” as they follow Jesus together. The church in Bidii is a group of poor and needy folks, but they have a burning zeal and unquenchable thirst for the kingdom of God and righteousness.

In their beginnings, they encountered much pain and sorrow under a false shepherd and self-seeking man, but  the Lord helped them to stand firm and strong in the narrow path, remembering what the Chief Shepherd said about the narrow road to the kingdom: it is not easy and it was not meant to be easy; rather, it is by much travail and tribulation that the gates of the kingdom can be entered. We thank God for the man Lazarus,  who has been a strong anchor and support to the brethren of Bidii. 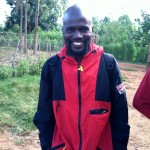 Lazarus is a strong brother in the LORD, an evangelist with zeal and passion for God’s kingdom. This man’s life story is a fascinating and captivating one, a story that reads like a movie script. His father divorced his mother when he was six, and he was raised by his alcoholic father. He felt alone and struggled through the many ups and downs of his young life, feeling largely unsupported and without guidance. Yet, God used this for good, as  a preparation for his future mission in the kingdom of Christ. How could this man know this from the onset? In fact he felt the opposite, he felt neglected and forsaken by the Lord.Twice he contemplated suicide and termination of his life. It is amazing what man can hold in his mind when he is ignorant of God’s will and love for him; indeed, His thoughts are different from our thoughts and His ways different from our ways.

Yet his background gave Lazarus a great empathy for those young people who were growing up vulnerable and disadvantaged. He turned his attention to the youth in his community, serving as a football coach and mentor. His life found some purpose and meaning, but he still felt something missing. Before he meet with Marc Carrier, a missionary in East Africa, who unveiled the hidden truth of the Kingdom to him, Lazarus sold drugs and trained in martial arts, even while he invested in the local youth as a coach. Yet in his sincere seeking of the Kingdom, he has found freedom from his past and experienced death of the old man of sin. A new man has been born again by the power of God.  The truth was given unto him, and now he is on fire, fighting a noble and royal fight of the Kingdom, a spiritual warfare, the battle between good and evil. Using his worldly experiences as a football coach, now he is coaching the little community of Christ of Bidii. He is leading many souls to the Lord, both old and young. Among his personal disciples are those of his own household: wife, children, and father. 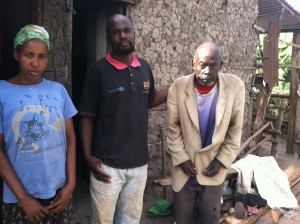 Lazarus has found many challenges as a follower of Christ in his village community. He has been scorned and ridiculed, and church leaders have directly threatened him because their traditions are being challenged. As the leader of a growing church with many struggling for their “daily bread,” he is looked to for support when he has his own household to keep in order. Yet, he accepts this challenge with strength and views it as an opportunity to live the Kingdom of God in a community of brethren who can support each other through their times of need. 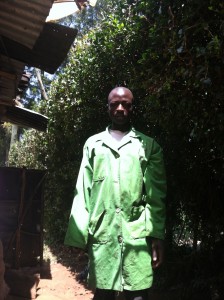 Daniel Miteti, another disciple in Bidii,  grew up as a fatherless young boy. Raised by his single mother until the young age of four, when the mother also passed away, he was left under the care of the family relatives. Did his relatives viewed him as a poor orphan who needed attention and love like other children? Of course not, they viewed him as a source of cheap labor, someone who will look after their cows, goats, and sheep while other children were in school seeking a better future. This is a normal case with many unbelieving families here in Africa. Do we still remember what the Psalmist said?, “Defend the poor and fatherless; Do justice to the afflicted and needy. Deliver the poor and needy; Free them from the hand of the wicked.They do not know, nor do they understand; They walk about in darkness; All the foundations of the earth are unstable.”(Psalm 82).

Daniel being weak and having no one to protect him, was frequently mistreated. One of his relatives ended up beating him badly and even threatened to cut off his hands after he lost the rope which was used to tie the cow. Eventually he was pushed out of the family and ended up in the street. Without any form of  education, the only work he could secure was that of a herdsman; he was employed to look after the animals, and there is where he met his wife-to-be, Sandra Nelima, and they wedded.

Our evangelist Lazarus met with them and shared the gospel with them, and both of them repented and were baptized two months ago. Now they are among the body of Christ, those who are called by the holy name of the Lord. Brother Lazarus did not just baptize them and abandon them but instead he gave them his little barber shop, which he also was given by the one who baptized him. Daniel and his wife now earn a little money to sustain them. (Their daily earning is approximately Ksh 200 [$2 per day]). And still life is a big challenge to him, being a husband and a father, a young disciple. His faith and love for Our Lord are very strong and the only reason to keep on moving. 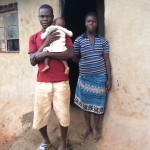 Brother Charles and his wife Lydia are among the brethren who meet in Bidii, the fruits of Lazarus. He also had a background like that of Lazarus and Daniel. His mother died when he was still an infant of two weeks old and he was raised with other family members. His father became negligent of the young Charles after he remarried. He never got any education, just like his other siblings. Being orphaned and poor he was an object of oppression and abused. He was falsely accused of stealing and was jailed fora  few months. Though he was eventually released, his freedom was not long lasting. He was once again accused with another false accusation of rape. Thank God for His divine intervention; Charles was released due to lack of sufficient evidence against him.

How did this  man came to the knowledge of God? How did he came to learn about the message of the Kingdom of God? Praise God for the work and obedience of Lazarus, who shared with him the gospel and led him in repentance and baptism. Now he, too, has a Father in Heaven who cares for him.

What is so  impressive about these little ones, the brethren of Bidii, is their obedience to the teachings and commandments of Jesus. Yes,  The two newest disciples are  are poor and needy and they cannot yet speak loudly and boldly about their faith. Yes, they are illiterate and unenlightened and they cannot preach a beautiful and colorful sermons. Yet,  they can live and practice the Kingdom. Their true love and obedience to Christ is their sermon to the world. The world marvels and wonders, “What makes these poor and uneducated folks so happy? What is the secret of their happiness?” It is their obedience to the great law of the Kingdom; they love the Lord their God with their whole hearts, souls and minds, and then they love one another as the LORD loves them.

The secret of their strength is their similar life experience, their common background, and their love for God. The Lord himself declared that the world will know we are His disciples by our love for one another. We pray that their love will grow stronger and stronger, and that more will join this faithful little group as they follow Christ in true unity.

Kingdom Driven Ministries welcomes Reagan Simiyu as a contributing author to the blog.