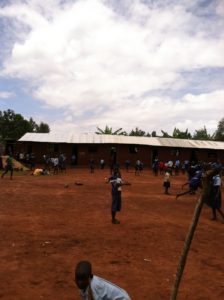 Children love to play. In every country, culture, home and continent, children play. Playing fulfills a vital role in childhood development. Without games to play, physical and mental  development of the children will be delayed. The basic similarity between a black child and a white child, an African child and an Asian child, a Kenyan child and an American child is that all have games they play. The only difference is in the types of games they play.

Since the dawn of civilization, Kenyan children have been playing many different games. Some of these games still exist today, while others melted away when the heat of technology and other online  games were introduced in the land, especially in the cities and urban towns. In the villages and communities where modern and western games have not found lodging, children continue to play their traditional games.

Among the common games that Kenyan children play is the tricky hide and seek; this takes at least the minimum of four children. One child will be asked to close his/her eyes or be hoodwinked with a piece of cloth so that the rest will run and hide in secret places; after few minutes the seeker will open the eyes or untie the cloth and start to seek others. In this version of the classic game, an object is placed in the center of the playing ground; if the seeker discovers the hiding place of one child, he runs to the object and hits it. The one who was discovered first will become the seeker in the next round of game. And if all the hiders hit the object before the seeker reveals them, he remains to be the seeker.

Many boys love to play marbles, known as “banta”  in Swahili. Often it is not really marbles; it can be nuts, seeds, stones, or dried fruits. Boys also learn how to make kites using plastic bags, strings and sticks. Often only “city boys” are expert in making kites, as compared to their village comrades.

In the neighborhoods where old and worn out bicycle, motorbike, and vehicle tires can be found, they become a playing tool for the children. You will find that rich children will play with vehicle tires taken from their parents’ cars, while the poor children will play with bicycles tires. Regardless of the form and type of the tire used, it is no less amusing to see them endlessly propel the tire forward with any good stick(picture on the right, a child with an old bicycle tire).

Girls plays with dolls made from old pieces of clothes, wood, or even plastic. Those who have parents in a good position financially will enjoy playing with real dolls.

Football (soccer) is the most common game Kenyan children play, both in the urban towns and rural villages. You will find children from different estates or villages coming together every evening after school and every weekend to compete in this sport. Many children cannot afford to own a real leather ball, but this to the children is a little matter. Almost every child knows how to make a paper-made ball. These balls are made from rolling plastic bags and tying them firmly together using ropes.

Skipping and jumping rope is one of the favorite games for young girls, especially those of lower grades (class 2 up to class 5). This game starts from the ankle, working all the way up to the neck. You only need a skipping rope, but many use stockings as an alternative to the ones you can buy at the store. In the game, two players stand on each end of the rope, swinging it in a circle motion, often while singing a song. A third player will start to skip and jump in the middle, as the rope turns. The two players on each end start swinging the rope low, which is easy for the jumper, then gradually progress by lifting the rope higher and higher to the knee, the thigh, then waist, until the third player can’t jump any higher. While the girls enjoy skipping, boys will find much fun in long-jumping and hopscotch. In most schools, children are taught these games as physical education.

Bird hunting, swimming, bicycle riding, fishing, and swinging are among many other games that village children love to play. Play is a universal need for children; only location and available resources determine how it will be met.