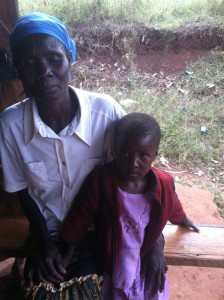 According to many statistics, approximately 69% of all people living with HIV/AIDS  are found in Sub-Saharan Africa. This is a serious crisis to many developing nations. Because of the magnitude of HIV-related sickness and death, pain and sorrow is often a part of daily life for those affected and for their relatives. The number of patients admitted to HIV/AIDS wards in hospitals continues to rise, and the number of widows and orphans as a result of AIDS deaths also increases day by day.

In general, for village communities, the AIDS crisis of downward-spiraling health, death, and creating orphaned or disadvantaged children, is compounded by several issues: the insufficiency of healthcare facilities to deal with with the number of affected individuals;  the inability of people to pay not only for healthcare but even transportation to and from healthcare facilities; and the stigma of HIV/AIDS, which often keeps those infected from seeking treatment. The lack of education in general is another contributing factor for the increasing numbers of HIV-infected individuals in village communities such as ours.

The HIV/AIDS epidemic isn’t pertinent only to the affected individuals; this is a tragedy that effects all of us on the level of our basic humanity.  Untold amounts of money have been invested by governments and non-governmental organizations, with the goal of  equipping health workers and educating the masses. Through this cooperation much has been achieved, but much remains to be accomplished. But let’s back away from the global and even national consequences and look at the individuals and their families.  What happens when families lose their loved ones? What about teen or young adult children that have to nurse and bury their parents?

When parents become too ill to work, to care for the household and even for themselves, it is often children who take on the role of nursing and care giving. Unprepared and untrained, some are forced to drop out of school and seek employment to support their families. Yet, what job will an unsophisticated child  secure? Without education, what opportunities are there for them? Such children are often taken advantage of and even abused; yet, they struggle to care for a family that is falling apart. When the parent dies, these young ones are left orphans and hopeless, often grudgingly taken in by aging or impoverished grandparents, who themselves struggle with the challenges of life. The financial burden of additional mouths to feed, as well as school fees and other expenses, is often too much for the elderly, who typically cannot work themselves. Though in the family-oriented village culture very few would refuse this burden, it is a heavy one to bear.

Perhaps it is not the parents who suffer, but the youth themselves. Like an out-0f-control brush fire, HIV infection is swiftly spreading from the older generation to the younger generation of people age 16 to 35. Because of the stigma of HIV/AIDS, people who suspect they are infected never go for testing, perpetuating the cycle of infection. Education on HIV prevention and treatment are often neglected. Innocent children are born infected from mothers who are sick. Because of their vulnerable position in society, the suffering of children particularly resonates with us when we hear of the ravages of HIV touching them. 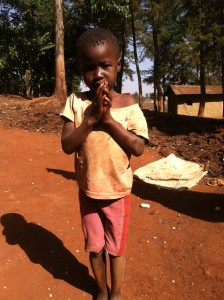 According to some statistics, of the 23.5 million people living HIV/AIDS  in Sub-Saharan Africa, 3.1 million are children. As we have seen, children suffer both directly and indirectly from the HIV/AIDS epidemic.  They may suffer directly by being infected by a parent. Others suffer indirectly as orphaned and abandoned children; many end up in the streets. Even if family members take them in, oftentimes resources are scarce and they are the first neglected. Or, the stigma of AIDS leads to maltreatment and the streets look more attractive than the current situation.

Let’s put a face to these statistics: just one young girl in our village, Loise Anita (pictured). Her parents both died due to HIV and left her under the care of the grandmother, who is a widow. Although the government provides Antiretroviral (ARV) treatments and some other services free of charge to try to alleviate the effects of AIDS, patients must travel to the District hospital on specified distribution dates in order to receive the benefits. In the case of Loise, her grandmother simply lacks the financial means to do this, therefore compounding the problem. 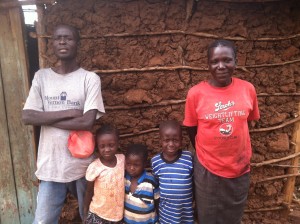 Dickson Simiyu (40 years) and his wife Brigit (38 years) are among many couples in this village who are living with HIV/AIDS. They have three young children: Gyan, Densil, and Griffin. So far as testing has revealed to this point, Griffin (4 years) is the only child also living with the virus. It was not until earlier this year, when visiting Kingdom Driven premises for medical and food assistance, that they came to learn of their status. Dickson is a manual laborer and currently able to work, but there is no extra money to take himself, his wife, and his young son into the District hospital on a monthly basis. When an average daily wage is 300 shillings and you’re lucky to feed your family on that, there is no extra 300 shillings once a month for transport. Yet without the medication to maintain his health, Dickson will more quickly lose the ability to work and provide for his family. Certainly, this is a conundrum.

What is the Role of KDM?

Though KDM does not have a formally recognized HIV/AIDS program, we have been moved to assist many HIV-infected folks whose paths we have crossed.  Some of these people have surrendered to Christ and been baptized in our fellowships. Within the last year or so, we’ve lost two sisters in the Lord: Violet, wife to David,  and Irene, a young girl of 20 years who we suspect was infected of unknown origin at a young age. One of our small house churches currently has several infected disciples: a widow with numerous children, two widowers with children, and a 14 year-old boy, Daniel. Others have been brought to our attention through community interactions. What do we do to help them?

In a recent interview with Silas, he expressed his deep and sincere concern  for the future generation. This is what he shared:

“My vision and mission is to save the future generation. We must teach and educate the young people; they need to be aware of the disease because it is killing our people every day. People must understand the danger and tragedy caused by HIV. We cannot sit aside and look, we need to do something.”

We need to do something. The time is now. KDM is playing only a small part, and we hope to increase that impact into the future. Please keep all these efforts in your prayers. Pray for the many individuals and families affected by the AIDS crisis here. If you wish to donate financially toward this effort, visit www.KingdomDriven.org/donate.