Naturally, man does a lot of things in his few and brief fleeting moments under the sun. Some of his daily activities seem so mundane yet very vital and important for his survival. Many take the ordinary activity of eating for granted, offering it little attention or reverence. But in reality, food is essential and vital for every living species in the universe. Food is the well spring of life and vitality.

No doubt, both the man in the White House and the poor man in a mud and grass house need food to gladden their souls. A king and a slave both need food to satisfy their hunger. Both rich and poor rise every morning and retire late in the evening to toil and labor for their daily food. Food is the focal point of man’s life; the only point where both races meet, and the vital activity that all living beings share in common.

The entire process of man’s deception, seduction and manipulation revolved and centered on the subject of food ( fruit ) and the eating (see Genesis 3). Crafty serpent fully knew the weakness of mankind laid on their vulnerability and dependence on food;  he deceived where it was hard to resist.When God cursed man, his punishment also rested on the matter of food:

“ Cursed is the ground because of you; through painful toil you will eat of it  all the days of your life. It will produce thorns and thistles for you,  and you will eat the plants of the field. By the sweat of your brow, you will eat your food…

In another ancient account, the man Abraham  demonstrated his hospitality and generosity to his divine guests by preparing and offering a delicious meal,

So Abraham hurried into the tent to Sarah. ” Quick,” he said, ” get three seahs of fine flour and knead it and bake some bread.

” Then he ran to the herd and selected a choice, tender calf and gave it to a servant, who hurried to prepare it. He then brought some curds and milk and the calf that had been prepared, and set these before them. While they ate, he stood near them under a tree.” (Genesis 18)

In the gospel account, we also learn of the vital role that food had in the life and ministry of Jesus,

Meanwhile the disciples were urging Him, saying, ” Rabbi, eat.”
But He said to them,” I have food to eat that you do not know about.”
So the disciples were asking to one another, ” No one brought Him anything to eat, did he?”
Jesus said to them, “My food is to do the will of Him who sent Me and to accomplish His work.” ( John 4:31-34).

In His compassion to the multitude of the people, He fed five thousand with two pieces of fish and five loaves of bread ( Luke 9:12-17), and four thousands in the second account. In the parable of the prodigal son, Jesus used the celebration and killing of a calf to symbolize the value of food in the spiritual and physical life of a person ( Luke 15:11-12), in the Lord’s prayer He instructed the disciples to remember asking for their daily bread,( Matthew 6:11), He further made it clear the cause of man’s anxiety and worries under the sun, is food and clothing, ” For this reason I say to you, do not be worried about your life, as to what you will eat or what you will drink; nor for your body, as to what you will put on. Is not life more than food, and the body more than clothing?” ( Matthew 6:25)

From the Biblical accounts to the present day, food plays a  fundamental role in every man’s life and every community.  Man needs his food to survive; thus, the creator of life has allowed sun and rain to help the land to produce all the food varieties ever known. Every community has their traditional foods, every family their staples, and every person their favorite.  Each food has its unique preparation and preservation.

In Kenya,  food plays an important role in uniting families and enhancing stability in the communities. Urban folks have different foods compared to the village folks. Most average village families, just like those in the West, take three meal a day: breakfast, lunch, and dinner.

Breakfast is often milk tea and a few slices of bread. In other homes corn meal porridge is the favorite morning meal. Families gather together for the morning meal. In a Christian family, the father, who is the head, will lead the family in prayer and thanksgiving. In the case of a traditional family, libation will be offered to the ancestors. A normal breakfast will cost at least  50KSH (50 cents) every day. Breakfast is normally eaten between 7 and 8 AM. 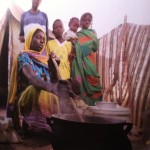 fter daily tasks and duties are done and the children are back from school, the family will come together again for their second meal. Many families in these villages use githeri (a mixture of maize and beans) as the best meal of the day, perhaps because of its high starch and heaviness. People’s main food, especially for dinner, is Ugali or fufu (corn meal). Ugali is a starch dish made from maize flour, which is stirred in boiling water to make it solid and eatable. It often goes well with greens or beef stew.

Of course, in the village, cooking is done in large pots over three stones (see Water and Fire, part 2).  Even making  a simple meal like githeri requires much time in sorting beans and cleaning maize; to say that many villagers eat this simple meal doesn’t show the many hours of labor involved in these efforts. May this article stir your reverence and appreciation to God for the gift of food for nourishment of man’s body. Remember to share your meal with the less privileged and the hungry.

Kingdom Driven Ministries is blessed to partner with those who care about feeding the poor; we  stock bags of maize (our community’s staple food) in the KDM office, which our church’s deacon gives to those in need (both from our fellowships and in our community). We want to offer a hand up, not a hand out, so we give 1 Kg per person per week, except in special circumstances. Thank you to all those who make this giving possible!